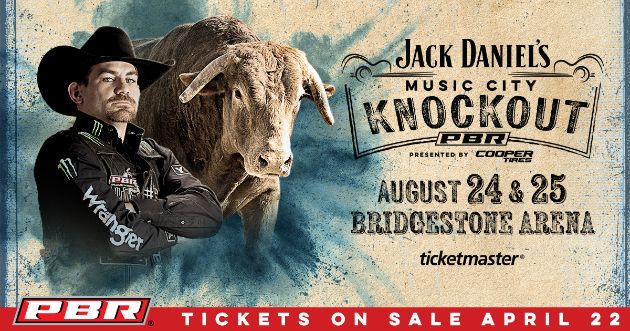 For the eighth consecutive year, PBR’s (Professional Bull Riders) elite Unleash The Beast will buck into Nashville and Bridgestone Arena for the fourth, and final, Major event of the season, the Jack Daniel’s Music City Knockout, presented by Cooper Tires on August 24-25.

As a PBR Major, riders compete for both increased prize money and world points. At a regular-season, two-day event a rider has the potential to earn 700 world points, with the victor guaranteed a check for $30,000. However, as a Major, one rider could leave Nashville with a check for $100,000 and as many as 1,250 world points. Additionally, the rider who records the highest marked ride will also receive a $26,000 bonus.

This season, the Jack Daniel’s Music City Knockout, presented by Cooper Tires will feature a new, progressive-elimination format, making its “hold on and advance” scheme one of the most challenging bull riding events in the world to win.

Each of the Top 35 bull riders on the PBR Unleash The Beast, in addition to four Velocity Tour and one Hispanic invite, will attempt one bull each in Round 1, aiming to make the 8-second buzzer. If a rider successfully covers his bull, he will advance to the next round. If he gets bucked off, he is finished. The Major is a minimum of two rounds and a maximum of five, with at least 25 riders advancing to Round 2. If fewer than 25 riders advance to Round 2, the remaining spots in the draw will be filled by the world standings heading into the event.

Last season, Cody Teel captured the first Major event win of his career in the Music City. Gaining a crucial 905 world points, the Texan was propelled from No. 12 to No. 6 in the world rankings, positioning him within 665.84 points of the top ranking as the season entered its final push to the 2018 PBR World Finals. Teel became the 17th different rider to win the event.

Positioned in the second-half of the elite tour’s schedule as the 20th event of the 2019 Unleash The Beast series, the Music City Knockout plays a key role in shaping the race for the World Championship. The significance of the event was exemplified in 2016 when Cooper Davis used a win at the Music City Knockout as a key stepping stone to capturing the year’s world title.

Additionally, in the 20 trips that PBR’s premier series has made to the city, only three riders have won the Major multiple times: Terry Don West (1998 and 1999), two-time PBR World Champion Justin McBride (2002 and 2008) and Robson Palermo (2007 and 2012). This season, Teel, alongside past winners Chase Outlaw (2014), Pacheco and Fabiano Vieira (2017), all of whom are anticipated to compete, will look to join the elite ranks of multi-time victors.

Tickets for the event go on sale Monday, April 22 and start at $10, taxes and fees may apply. They can be purchased at the Bridgestone Arena Box Office and all Ticketmaster outlets, and online at Ticketmaster.com.

For an enhanced PBR experience, fans can now purchase PBR Elite Seats and Premium Experiences, which provide a behind-the-scenes look into the toughest sport on dirt.

These premium options include early entry; tickets to a premium seating section; a catered reception; a pre-event, backstage tour by a PBR Host, featuring a PBR 101 presentation and visit with the sport’s fiercest bovine athletes; and the opportunity for photos and autographs from the sport’s top stars. After the event, ticketholders also will be given premium dirt access, where they can get their complimentary 2019 PBR program, Elite Seat lanyard and other memorabilia autographed by the Top 35 bull riders in the world.

For more information on the upgraded experiences fan can contact PBR Direct at 800-732-1727.