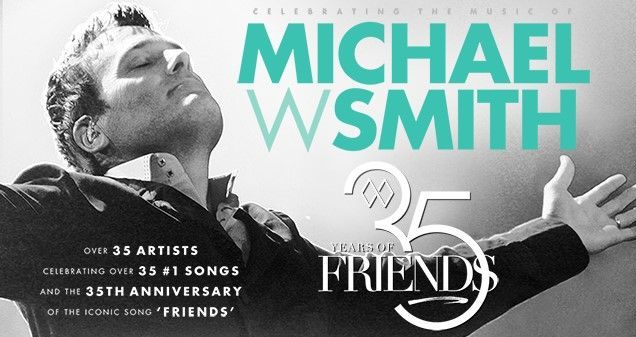 35 Years of Friends: Celebrating the Music of Michael W. Smith

35 Years of Friends: Celebrating the Music of Michael W. Smith

The night toasts Smith’s 35-year Grammy and Dove Award-winning career, including hit track “Friends.” The “Waymaker” and “Place In This World” singer released his latest studio album, “A Million Lights,” in February 2018.

With over 45 Dove awards, three Grammy awards, and an American Music award, Michael W. Smith has forever enshrined his mark in the music history books. Smith garnered yet another Grammy nod last Friday with a nomination for 'Best Contemporary Christian Music Album' for his latest worship effort, 'Surrounded.'

In a once-in-a-lifetime tribute event, promoted by Outback Concerts and produced by Tony Conway of Conway Entertainment Group, friends and fellow musicians will pay tribute to Smith on April 30, 2019, at the Bridgestone Arena in Nashville, Tennessee. Tickets are still available at Ticketmaster.com!

Dubbed ‘35 Years of Friends: Celebrating The Music of Michael W. Smith,’ music lovers will experience over 35 artists, from all genres, performing a set list to include many of Smith’s 35 #1 hit singles. In addition, 2018 marks the 35th Anniversary of Smith’s Top 10 single “Friends,” which helped introduce his music to both secular and non-secular audiences. Smith once again shared the song with the world when he performed it at the Washington, D.C. memorial service for his dear friend, President George H.W. Bush, last Wednesday.

Tickets are on sale now at all Ticketmaster locations and the Bridgestone Arena.