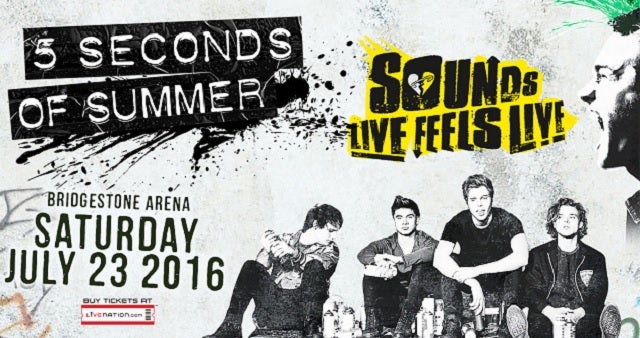 On the heels of wrapping up their hugely successful “Rock Out With Your Socks Out Tour,” 5 Seconds of Summer announce plans to return to North America next summer for another extensive run stopping by Bridgestone Arena Saturday, July 23rd.

5 Seconds of Summer’s self-titled debut album entered the Billboard 200 at No. 1, selling 260,000 units in the U.S. in its first week of release, marking the biggest debut for a new act in 2014 and the biggest debut ever by an Australian artist. It topped the iTunes charts in a total of 76 countries. The band has won numerous awards, including an American Music Award, a People’s Choice Award, five MTV European Music Awards, an MTV Video Music Award and an iHeartRadio Music Award. In 2015, 5 Seconds of Summer played to more than one million fans across three continents, including three massive sold-out nights at the SSE Wembley Arena in London.