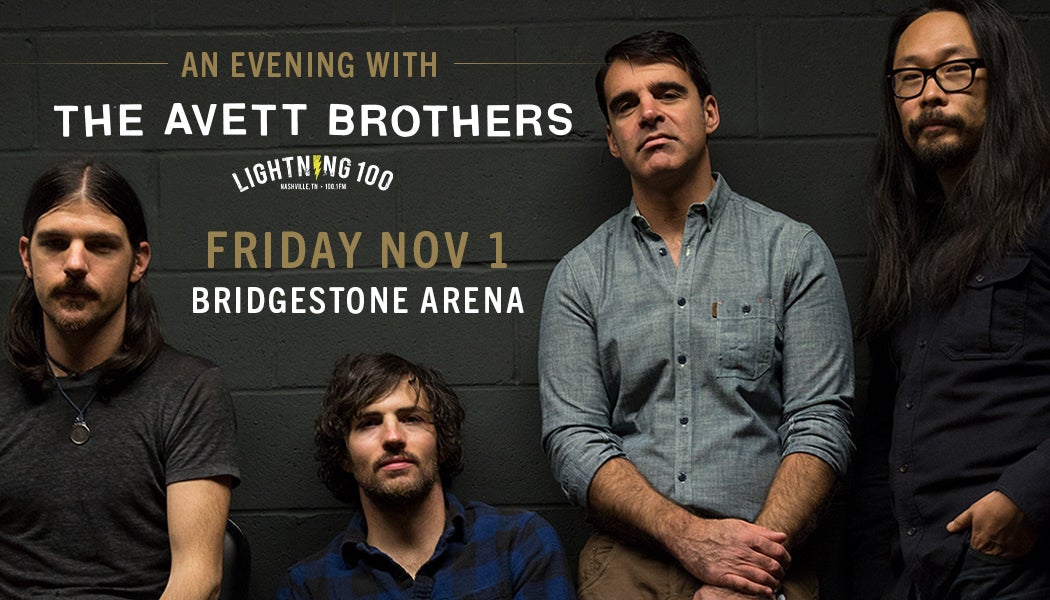 An Evening With The Avett Brothers

An Evening With The Avett Brothers

Nov 01, 2019
An Evening With The Avett Brothers
Presented by Lightning 100
Buy Tickets
Share

An Evening With The Avett Brothers presented by Lightning 100 is coming to Bridgestone Arena on Friday, November 1, 2019. Tickets are on sale now.

­About The Avett Brothers

The Avett Brothers made mainstream waves with their 2009 major label debut, I and Love and You, landing at No. 16 on the Billboard Top 200 and garnering critical acclaim. 2012 saw The Carpenter hit No. 4 on the Billboard Top 200 and was followed by Magpie and the Dandelion (2013) which debuted at No. 5 on Billboard’s Top 200 and saw the band appear twice on Jimmy Kimmel Live! True Sadness (2016) achieved The Avett Brothers’ highest career debut to date hitting No. 1 on Billboard’s Top Albums Chart, No. 1 Top Rock Albums Chart, No. 1 Digital Albums Chart, No. 3 on Billboard Top 200, and scoring two GRAMMY® nominations. In the same year, the band was inducted into the North Carolina Music Hall of Fame. In 2017, the band released their critically acclaimed documentary May It Last: A Portrait of The Avett Brothers, which was co-directed by Judd Apatow and Michael Bonfiglio. The film followed the band as they wrote their GRAMMY® nominated album True Sadness. The film was released theatrically and on HBO to rave reviews and critical acclaim and is now available on DVD/Blu-Ray/VOD. In November 2018, the band headlined the concert for Hurricane Florence Relief in Greenville, North Carolina, raising $325,000 to help those affected by Hurricane Florence.

Four new songs have recently been released (“Roses and Sacrifice,” “Trouble Letting Go,” “Neapolitan Sky,” “High Steppin’”) in anticipation of new album Closer Than Together, to be released on October 4, 2019.

Coming soon: Swept Away - a new musical inspired by and featuring the music of The Avett Brothers- will have its world premiere at Berkeley Repertory Theatre in June 2020.