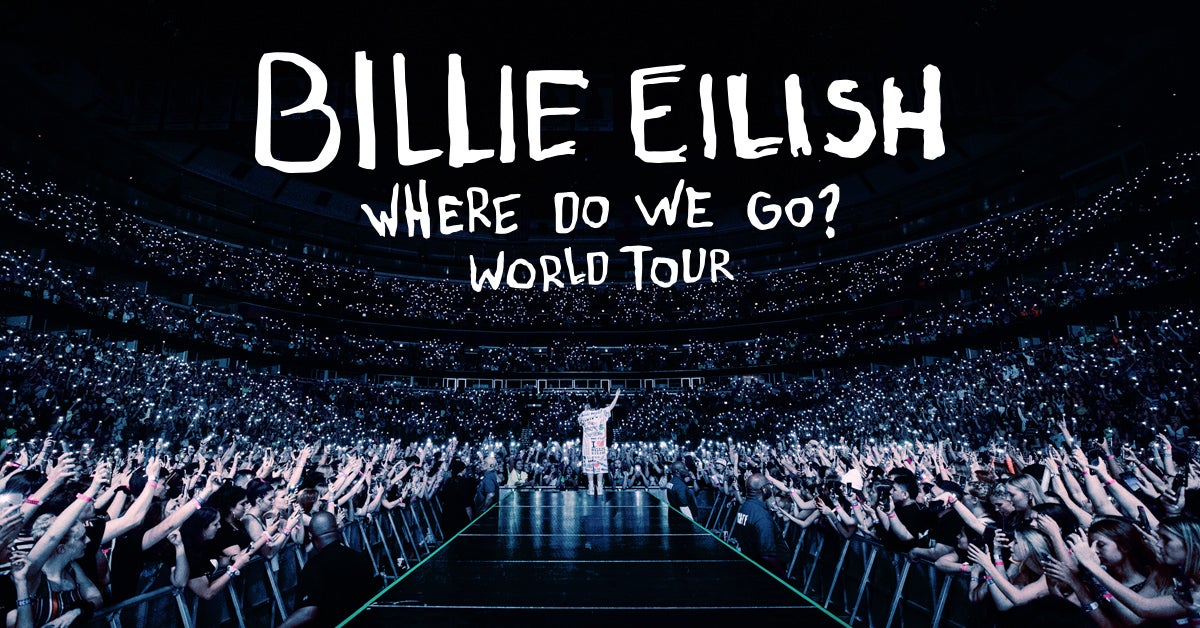 WHERE DO WE GO? WORLD TOUR

WHERE DO WE GO? WORLD TOUR

Billie Eilish is bringing her WHERE DO WE GO? WORLD TOUR to Bridgestone Arena on Friday, March 27, 2020. Tickets on sale Friday, October 4, 2019. Sign up for the verified fan pre-sale now for early access to tickets: https://verifiedfan.ticketmaster.com/billieeilish

Global, chart-topping Interscope/Darkroom Records artist Billie Eilish has announced her 2020 arena WHERE DO WE GO? WORLD TOUR, produced by Live Nation. Starting on March 8 in Miami, FL, WHERE DO WE GO? tour will take her live show to some of the world’s biggest arenas including New York City’s Madison Square Garden on March 15. General on-sale starts Oct 4. For a full list of tour dates and ticket information, see below, for more information go to: www.billieeilish.com/tour

Following the release of her official music video for ‘all the good girls go to hell’ – accompanied with the important call to action on climate change – Billie Eilish continues to set an example by partnering with non-profit organization REVERB for her upcoming tour. To help create and encourage an eco-conscious environment both backstage and for her fans, Billie Eilish will be allowing fans to bring their re-fillable water bottles to the shows, water-stations will be available at every venue for both attendees and crew backstage, plastic straws will not be permitted and a Billie Eilish Eco-Village will be stationed at every show, providing attendees information and resources on ways to help combat climate change and preserve the Earth. For more information, go to www.billieeilish.com

Tomorrow night, Billie Eilish will be joining host Woody Harrelson as the musical guest for the season opener of NBC’s Saturday Night Live. Tonight, she will be the lead guest on NBC’s The Tonight Show Starring Jimmy Fallon. On Monday, she will be appearing on The Howard Stern Show on Sirius/XM.

Last month, Billie Eilish earned her first No. 1 on the Billboard Hot 100 with ‘bad guy,’ taken from her multi-platinum global smash debut album, WHEN WE ALL FALL ASLEEP, WHERE DO WE GO? [Darkroom/Interscope Records].

Billie Eilish is officially the first artist born this millennium to achieve both a No. 1 album and single, and is now the third female solo artist in the 31-year history with multiple songs topping the Billboard Alternative Songs airplay chart (alongside Alanis Morrissett and Sinead O’Connor). "bad guy” also hit #1 in the Pop Songs airplay chart after leading the Alternative Songs airplay. Her album, WHEN WE ALL FALL ASLEEP, WHERE DO WE GO? -- released on March 29 [Darkroom/Interscope Records] -- debuted at No.1 on the Billboard 200 album chart, has since returned to the top spot two additional times this year, and is currently 2019’s best-selling album in North America. Recently, Billie Eilish graced the cover of Rolling Stone, V and ELLE, and has amassed more that 17-billion combined global streams to date.