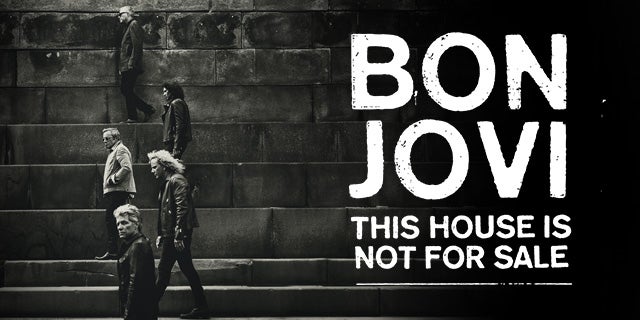 THIS HOUSE IS NOT FOR SALE TOUR

THIS HOUSE IS NOT FOR SALE TOUR

Feb 18, 2017
Bon Jovi
THIS HOUSE IS NOT FOR SALE TOUR
Buy Tickets
Share

Grammy Award®-winning band, Bon Jovi announced that the This House Is Not for Sale Tour, presented by Live Nation, will stop at Bridgestone Arena February 18. Tickets are on sale now at Ticketmaster.com, the Bridgestone Arena Box Office, LiveNation.com, or by calling  800.745.3000. Hitting arenas across the U.S., the iconic rock band will present anthems, fan favorites, and new hits from their upcoming 14th studio album, This House Is Not for Sale (out Nov. 4 on Island/UMG). As an added bonus, fans will receive a physical copy of This House Is Not For Sale with every ticket purchased.

This will be the band’s first outing since Bon Jovi’s 2013 Because We Can World Tour, which was their third tour in six years to be ranked the #1 top-grossing tour in the world (a feat accomplished by only The Rolling Stones previously). Bon Jovi’s touring legacy will be recognized Nov. 9th with the 2016 “Legend of Live” award at the Billboard Touring Conference & Awards.

As Bon Jovi rocks October to launch This House Is Not for Sale, the title track is already inside the Top Ten of the AC Radio Chart – it is Bon Jovi’s highest debut on that chart to date. Visit www.bonjovi.com for updated tour and ticketing information.

Earlier this month, Jon Bon Jovi announced on Facebook Live an exciting opening act contest to give bands the chance to open an arena date on Bon Jovi’s This House Is Not For Sale Tour. To enter the competition, thousands of bands uploaded audition videos at www.bonjovi.com/2017-opening-act-contest/ or the Bon Jovi and Live Nation Facebook pages. To pick the winner for each tour date, Live Nation chose 10 finalists and Bon Jovi management selected the contest winner from the shortlist. After an intense competition, hometown hero Jake Johnson has been chosen as the winner of Bon Jovi’s opening act contest for Nashville. In addition to opening for Bon Jovi on February 18, Jake Johnson will also be featured across Live Nation and Bon Jovi’s Facebook pages.