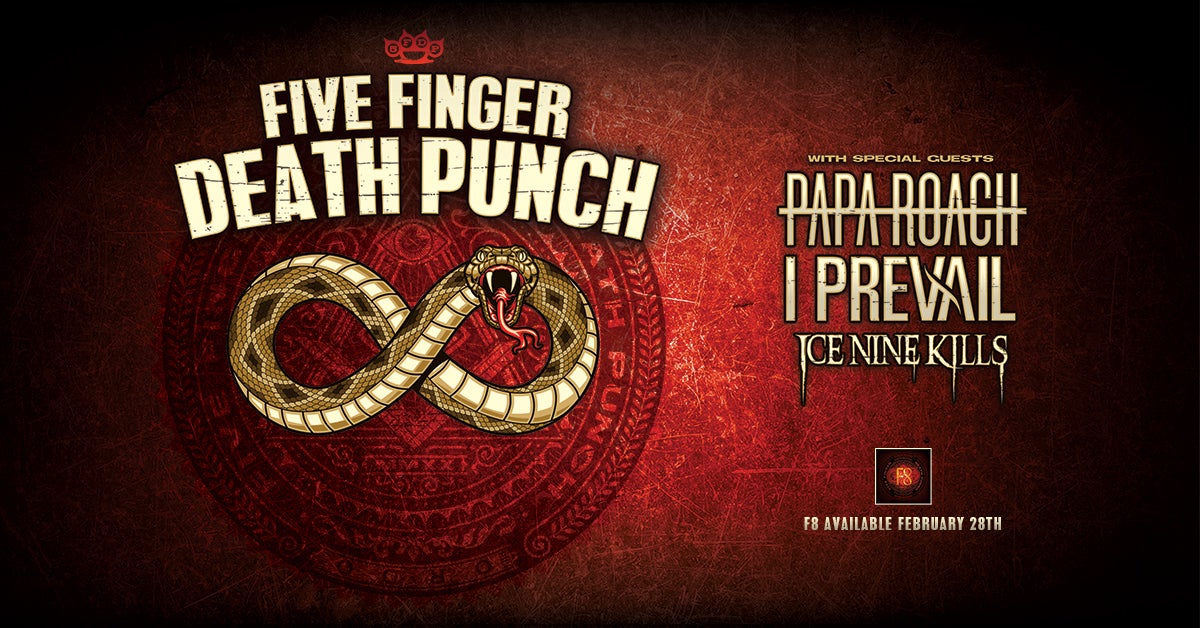 4x Platinum, 6x Gold record selling rock juggernaut FIVE FINGER DEATH PUNCH have announced that they will kick off the 2nd leg of their current US arena headline tour in April, featuring special guests Papa Roach, I Prevail, as well as highly acclaimed newcomer Ice Nine Kills. The tour is co-produced by FRANK PRODUCTIONS and LIVE NATION. The tour will be stoping at Bridgestone Arena on May 17, 2020. Tickets are on sale now.

Papa Roach have been one of the leaders in alternative rock for nearly 26 years. The two-time GRAMMY-nominated band have sold over 20 million records worldwide, garnered over 2 billion streams to date, and charted over 14 Top 5, hit singles and six #1 hit singles  including “Last Resort” (2000), “Scars” (2005), and most recently, “Born for Greatness” (2018). Their 10th studio album, Who Do You Trust? marks a paradigm career shift for the band, with singles “Who Do You Trust?” and “Elevate” having steadily remained in the Top 10 at Active Rock Radio, marking 14 Top 5 hits and six #1 hit singles in their career. For more information on Papa Roach, please visit https://www.paparoach.com

I Prevail’s 2016 debut album, Lifelines was one of the most successful debut releases for a hard rock band in the last decade in terms of sales and streams, with nearly 600,000 copies sold to date. The grammy nominees’ sophomore album, Trauma tells the complicated story of what the band went through to get to where they are today. For more information on I Prevail, please visit http://iprevailband.com

FIVE FINGER DEATH PUNCH are currently touring US arenas before heading to Europe right after the holidays for their nearly sold out European arena run with very special guests Megadeth and global breakout rock sensation Bad Wolves. Information on all tour dates including links to tickets and VIP packages can be found HERE.

Along with the unveiling of their next massive tour, FIVE FINGER DEATH PUNCH have announced their long awaited eighth studio album, titled “F8” as well. The album will be released globally on February 28th, 2020 and is available for pre-order now.

FIVE FINGER DEATH PUNCH have amassed over 3 billion streams to date and are the 3rd biggest artist in the hard rock space measured by total consumption (sales and streams). They are surpassed only by Metallica and AC/DC. Newly signed to Better Noise Music, they’ve garnered 22 top 10, hit singles over the last few years. Today, FIVE FINGER DEATH PUNCH also premiered the debut single from F8, “Inside Out” one of the most personal songs that the band has released to date. Watch the official lyric video HERE. Fans who pre-order the album digitally will receive an instant download of “Inside Out” along with two other new tracks before the release on February 28th. The album will be available in CD, digital and vinyl format, and the band also curated special F8 merchandise bundles, available for pre-order now as well.

Says FIVE FINGER DEATH PUNCH guitarist Zoltan Bathory, "We had an extremely successful, yet tumultuous couple of years as a band. We didn't just weather the storm but came out on the other side better than ever. It was a focused sober group recording its most important album to date and without a question it shows. This album represents rebirth, progression, transcendence both personally and musically."

Vocalist Ivan Moody adds, “This record to me is ‘absolution’ - everything I’ve done in my life has led up to this moment."

The new album F8 follows FIVE FINGER DEATH PUNCH’S hugely successful 2018 release, And Justice For None, which debuted in the Top 5 around the world and at #4 on the Top 200 Album Chart. It became the #1 streaming Hard Rock/Heavy Metal album of that year. They’ve built a rabid, global fanbase by creating a unique sound that blurs the line between rock and metal, which has never been more apparent than on their upcoming eighth studio album F8 and their upward trajectory doesn’t seem to waver.

FIVE FINGER DEATH PUNCH, have become one of the most recognizable names in music, frequently play the biggest festivals and sell out arenas around the world. After releasing their debut album, The Way of the Fist, in 2007, the rising metal stalwarts released five consecutive albums that were certified Gold or higher by the RIAA. The band has earned numerous awards and honors and is one of the few recipients of the prestigious Soldier Appreciation Award from the Association Of The United States Army. In 2019, the band collaborated with Brantley Gilbert, Brian May and Kenny Wayne Shepherd to release their version of the latter’s hit “Blue On Black,” now one of the Top 10-Selling Rock Songs of 2019, with proceeds from the track being donated to the Gary Sinise Foundation. Their eighth full length album, F8 will be released via Better Noise Music on February 28th, 2020 and will undoubtedly raise the bar again.

The fastest way to enter Bridgestone Arena is to not bring a bag at all. Clear or no bags grant guests access to our Express Lanes. Bags that are made of solid material that fit within the 12-inch-by-12-inch-by-6-inch size requirement will be placed through an X-ray scanner upon entry. Bags larger than the 12-inch-by-12-inch-by-6-inch dimensions, including duffel bags, cooler bags, backpacks and rolling luggage, will continue to be prohibited inside of Bridgestone Arena. All clear bags must be completely clear and may not have any color tinting, printed designs or panels of fabric. Diaper bags that fit within the guidelines of the approved bags will be permitted but must go through bag X-ray machine. No belt chains or chained wallets will be permitted.