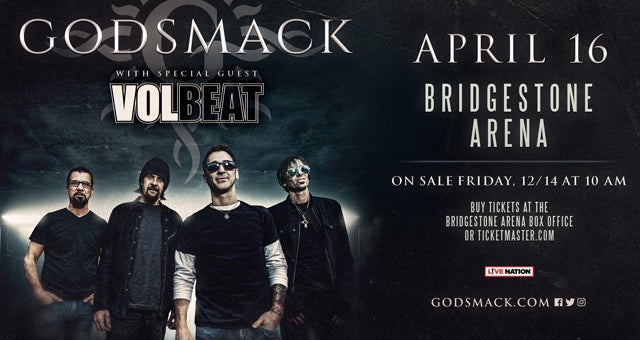 GODSMACK will return to the road in 2019 on a North American headlining tour with VOLBEAT on April 16, 2019. Tickets are on sale now!

Earlier this year (4/27), GODSMACK released WHEN LEGENDS RISE via BMG (US) and Spinefarm (Worldwide), marking the band’s seventh studio album and their first in four years. The acclaimed 11-song collection, fueled by the Top 5 rock song and video “Bulletproof” plus the title track “When Legends Rise,” entered the Billboard Top 200 album chart in the top ten (#8), with four #1 placements on other charts: Top Rock Albums, Top Hard Music Albums, Top Independent Albums and Top Alternative Albums. WHEN LEGENDS RISE is available on CD, LP and Digital; purchase or stream it here.

“…Godsmack, after taking the stage for over two decades, still puts on an amazing set…”

“Godsmack put on a solid show and impressive pyro display.”

“Filled with pyro, extreme lighting, sonic booms, and their entire catalogue of hits, this was an adrenaline rush entering your veins from start to finish.”