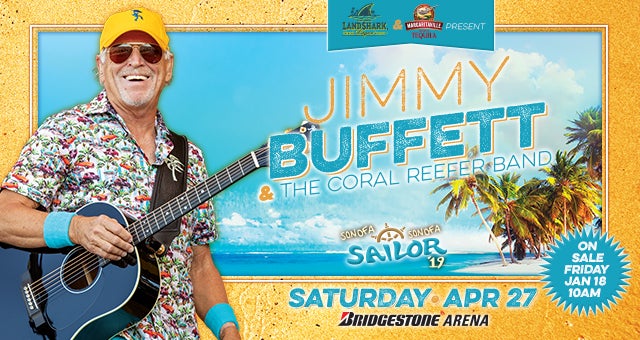 Nashville, the wait is officially over! Jimmy Buffett and the Coral Reefer Band will perform at Bridgestone Arena for one night only, SATURDAY April 27 at 8 pm, as part of Jimmy Buffett’s “Son Of A Son Of A Sailor” Tour 2019. Local Parrotheads won't want to miss their chance to soak in the full Margaritaville experience. “I cannot think of a better way to get an early start to the summer than hosting a Saturday night Jimmy Buffett concert at Bridgestone Arena,” said David Kells, Senior Vice President, Entertainment and Marketing. “With his deep connections to Nashville, you know it’s going to be a party to remember!” Jimmy released his famous Son Of A Son Of A Sailor LP in 1978, and sang the title track on Saturday Night Live that year. The song was written about his grandfather, James Delaney Buffett, Sr., who was a huge influence on his life. The tour is called Son Of A Son Of A Sailor as 2018 was the record's 40th anniversary, and the celebration continues through 2019. The record also includes the hit, “Cheeseburger In Paradise,” a Parrothead favourite, as well as “Livingston Saturday Night” and “Cowboy in the Jungle.” The long-awaited Margaritaville musical, "Escape to Margaritaville," opened on Broadway in New York, had its world premiere in La Jolla, California, and then made pre-Broadway stops in New Orleans, Houston and Chicago. The original Broadway cast recording of the musical was recently released. The musical will go on tour in 2019.