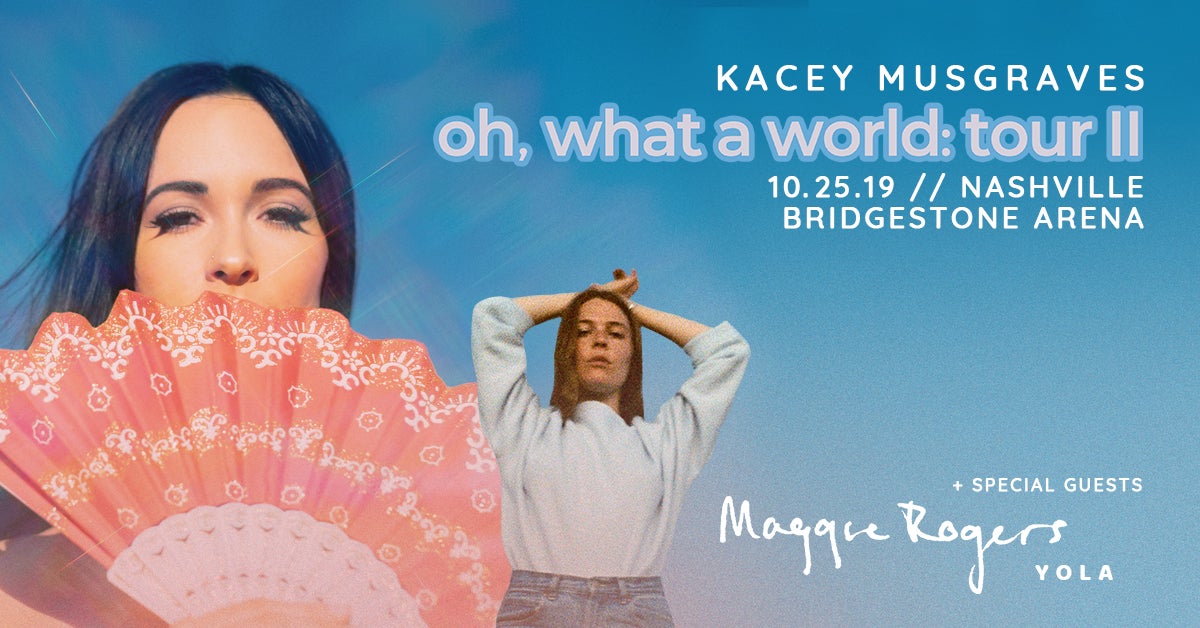 Oh, What a World: Tour II

Oh, What a World: Tour II

Due to overwhelming demand, six-time GRAMMY Award-winning artist Kacey Musgraves has announced five additional tour dates on her Oh, What a World: Tour II. Produced by Live Nation, these U.S. tour dates will see Kacey headlining some of the biggest venues of her career, including Nashville’s Bridgestone Arena on Friday, October 25TH

Tickets are on sale now.

Kacey has experienced a whirlwind year following the release of her #1 third studio album Golden Hour in March 2018. Kacey took home Album of the Year at the GRAMMY Awards, Country Music

Association Awards,  Academy of Country Music Awards and Golden Hour was named one of the best albums of 2018 by everyone from NPR, Time, The Associated Press and GQ to Rolling Stone, Billboard, Pitchfork, and Complex. Vogue proclaimed Kacey’s “mesmerizing blend of emotional directness and swirling pop melodies, old-school musicianship and new-school production, is a cross-genre triumph that feels so right for now,” and V pronounced, “a masterpiece of crossover country, the record showcased a heartfelt and accessible style, place her both in the glittering center of pop culture and the ears of listeners of every stripe.”

Golden Hour has taken Kacey around the globe; in addition to headlining shows in North America, the U.K., Europe, Japan, China, New Zealand, and Australia, Kacey performed at Global Citizen Festival: Mandela 100 in South Africa. This year, she performed at festivals from Bonnaroo to Governors Ball, and became the first-ever female country artist to play Coachella. She continues to hit the festival circuit with upcoming performances at the Newport Folk Festival, FloydFest, Hinterland Music Festival, Lollapalooza and Outside Lands. In celebration of Golden Hour’s success, Kacey has been honored at Billboard’s Women in Music event, Variety’s Power of Women event and she has recently celebrated the opening of her exhibit, All of the Colors, at the Country Music Hall of Fame and Museum, on display through June 2020.