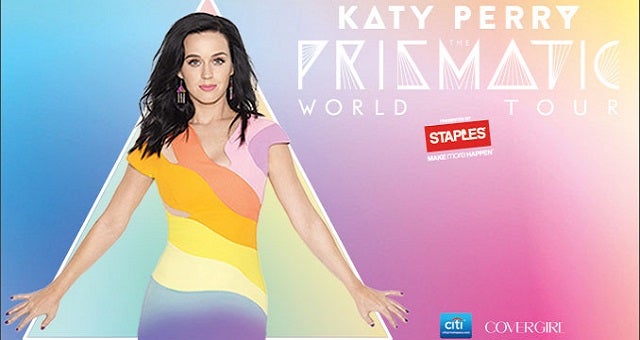 International superstar, Katy Perry, will return to Bridgestone Arena June 27th and will be touring in support of PRISM, which debuted at number one on The Billboard 200 and remains in the Top Ten three months after release.  The platinum album has given Katy her biggest ever single with "Roar", while "Dark Horse" just became her lucky 13th Top Ten hit on The Billboard Hot 100.

"THE PRISMATIC WORLD TOUR is coming to light up some of my favorite North American cities this summer, as well as some new cities that you introduced me to through your video requests” said Katy. “This colorful show will bring you all the songs you know as well as ones from my new album, PRISM. I'm so excited that I got to hand-select some of my favorite artists to join me on this journey - I know you'll love Capital Cities, Kacey Musgraves and Tegan and Sara as much as I do."

The state-of-the art stage, specifically designed by Katy for THE PRISMATIC WORLD TOUR, allows her to get closer to her fans than ever before.   The one-of-a-kind set design will provide concert-goers with a truly magical experience from every angle in the arena. Ticket offerings include a limited number of general admission tickets in the intimate “Reflection Section”.

We will conduct a lottery for the Katy Perry show at 9:40AM on Monday, January
27th at the Bridgestone Arena box office. The winning lottery number will be first in line, and the following numbers will line up behind that person. Anyone arriving after 9:40AM will join the line at the end. Tickets start at $130.00, and please have your photo ID out if paying by credit card. There is a 6 ticket limit.