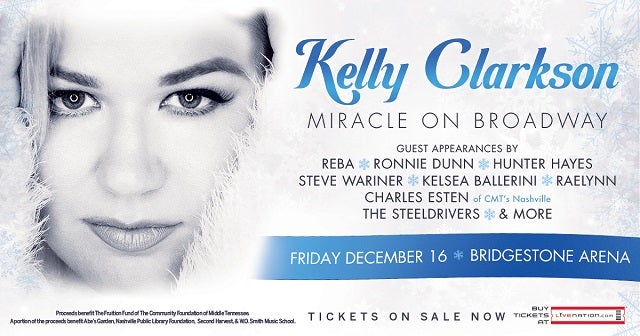 Multi-Grammy-winning artist and The New York Times best-selling author Kelly Clarkson has announced her second Miracle on Broadway holiday concert.  The Friday, December 16, event at the Bridgestone Arena in downtown Nashville will benefit four Music City nonprofits handpicked by Clarkson. Abe’s Garden, the Nashville Public Library Fund, Second Harvest Food Bank of Middle Tennessee and the W.O. Smith Nashville Community Music School will receive funds through The Fruition Fund of The Community Foundation of Middle Tennessee. Clarkson created this donor-advised fund in 2014 as an acknowledgment of the desire in all of us to help where we can while shining a little light on the things in life that matter.

Reba, Kelsea Ballerini, RaeLynn, Hunter Hayes, Chip Esten (of CMT’s “Nashville”) and The SteelDrivers are just a few of the artists scheduled to perform. Additional names will be announced in the weeks leading up to the event which is named for Clarkson’s favorite holiday movie, “Miracle on 34th Street.”

"I can't wait for everyone to see what we have in store for this year's Miracle on Broadway!” said Clarkson. “At our last event we raised hundreds of thousands of dollars for some great Nashville organizations and this year we are aiming to do the same. I'm looking forward to singing with some amazing artists and putting on one hell of a Christmas show!"

Ticket prices range from $29.75 - $49.75 and are still available. Tickets can be purchased at the Bridgestone Arena box office, all TicketMaster outlets, www.livenation.com or by calling 800-745-3000.

Earlier this year Clarkson announced her long-term, worldwide record deal with Atlantic Records. The Nashville resident, who has sold over 25 million albums and 36 million singles worldwide since the launch of her recording career in 2002, is slated to release her first album with Atlantic in 2017. The album will draw from the inspiration of soul and R&B as the foundation to her endearing lyrics and powerhouse vocals.