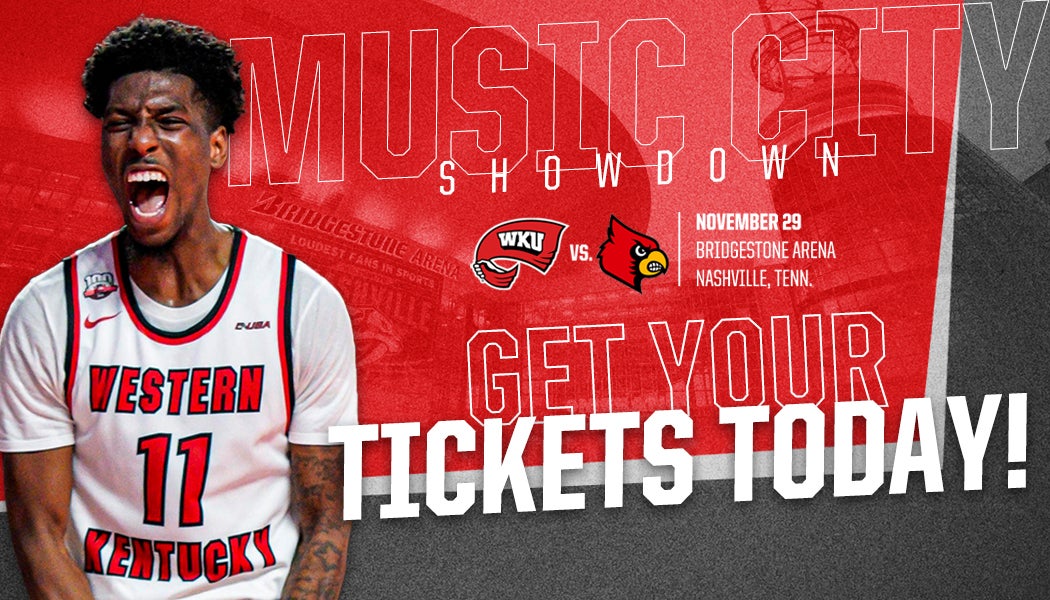 On Friday, Nov. 29 at Bridgestone Arena, Western Kentucky University men’s basketball will host University of Louisville in the 2019 Music City Showdown. Tickets for this Black Friday matchup are currently on sale.

“Bridgestone Arena is a special place for college basketball and has a long history with both Western Kentucky and Louisville,” said Predators SVP of Entertainment & Marketing David Kells. “We look forward to welcoming both teams back to Nashville and know that their dedicated fans from Middle Tennessee and beyond will fill 501 Broadway with a sea of red this Thanksgiving weekend.”

The 2019 Music City Showdown sees WKU and Louisville face off for the first time since Dec. 19, 2015, when the Hilltoppers fell to the Cardinals by a score of 78-56. The teams met previously at Bridgestone Arena three times in neutral-site matchups. Of those three matchups, Louisville was victorious in both 2003 and 2012, with WKU earning a win in 2008, their most recent win against Louisville.

“We’re excited about the opportunity to face one of the top teams in the country in Louisville in Nashville this November,” said fourth-year WKU Head Coach Rick Stansbury. “Western Kentucky and Louisville are two of the winningest teams in NCAA history, and having two programs with so much tradition playing each other is good for the game and good for our state. We have a strong group of alumni in the Nashville area, and it’s an easy drive for many of our fans, so we look forward to having as many Hilltoppers as we can cheering us on in Bridgestone Arena.”

The Hilltoppers are 7-3 against power five conference teams over the last two seasons and have won 47 total games over that span. WKU ranks third in NCAA history in regular-season league titles (42), seventh in 20-win seasons (45), eighth in all-time winning percentage (.660) and 16th in all-time wins (1,795)