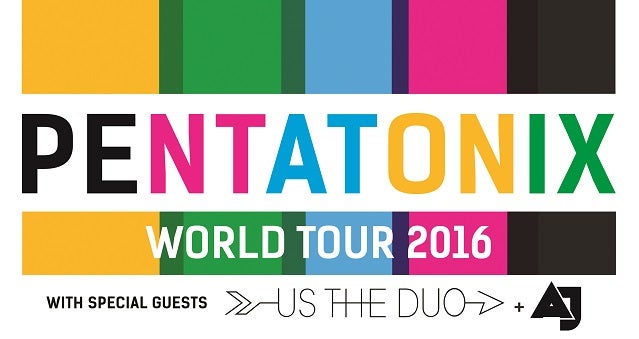 Pentatonix: The World Tour 2016 with special guests Us The Duo & AJ

Pentatonix: The World Tour 2016 with special guests Us The Duo & AJ

Since bursting onto the scene in 2011, platinum selling recording artists Pentatonix have sold more than 2.7 million albums in the U.S. alone, won a Grammy Award, sold out venues worldwide, have amassed over 1.4 billion views on their YouTube channel with over 10 million subscribers and appeared in the feature film Pitch Perfect 2.  Their latest release, Pentatonix debuted at #1 on the Billboard Top 200 and Current Albums Chart.  The first single, “Can’t Sleep Love” has over 17 million views on YouTube.  The group also released an enhanced deluxe version of their platinum selling holiday album, That’s Christmas To Me, which features their recent 2016 Grammy nominated track, “Dance of the Sugarplum Fairy.”

All 7 of their releases have peaked within the Top 5 on Billboard’s Digital Albums Chart with 6 of those releases reaching the Top 10 or higher on the Billboard Top 200 Album Chart. Most recently, the group received 2 gold certifications for their “Daft Punk” medley and cover of Imagine Dragons’ “Radioactive” ft. Lindsey Stirling. Their 2014 holiday album, That’s Christmas To Me has sold more than 1.7 million copies in the U. S. and was the 4th best-selling album of 2014. The group released their very first documentary (On My Way Home) which follows the quintet on their sold out 2015 North American Tour featuring behind-the-scenes footage, life performance and the making of their debut studio album, Pentatonix.

Us The Duo has amassed a fan base of over 10 million followers since launching their groundbreaking #6SecondCovers online. The couple's 2014 album, “No Matter Where You Are” debuted at #9 on iTunes, and they’ve been featured by Good Morning America, TODAY and TIME. Selling out headlining shows around the world, Michael and Carissa have also toured with GRAMMY nominated artist Tori Kelly and are excited to join Pentatonix this Spring. Us The Duo’s music was featured in the motion picture “The Book Of Life” which led to their performances as part of Oprah's The Life You Want Weekend Tour. Their music has been streamed over 100 million times on Spotify and YouTube. Us The Duo will release new original music this year.