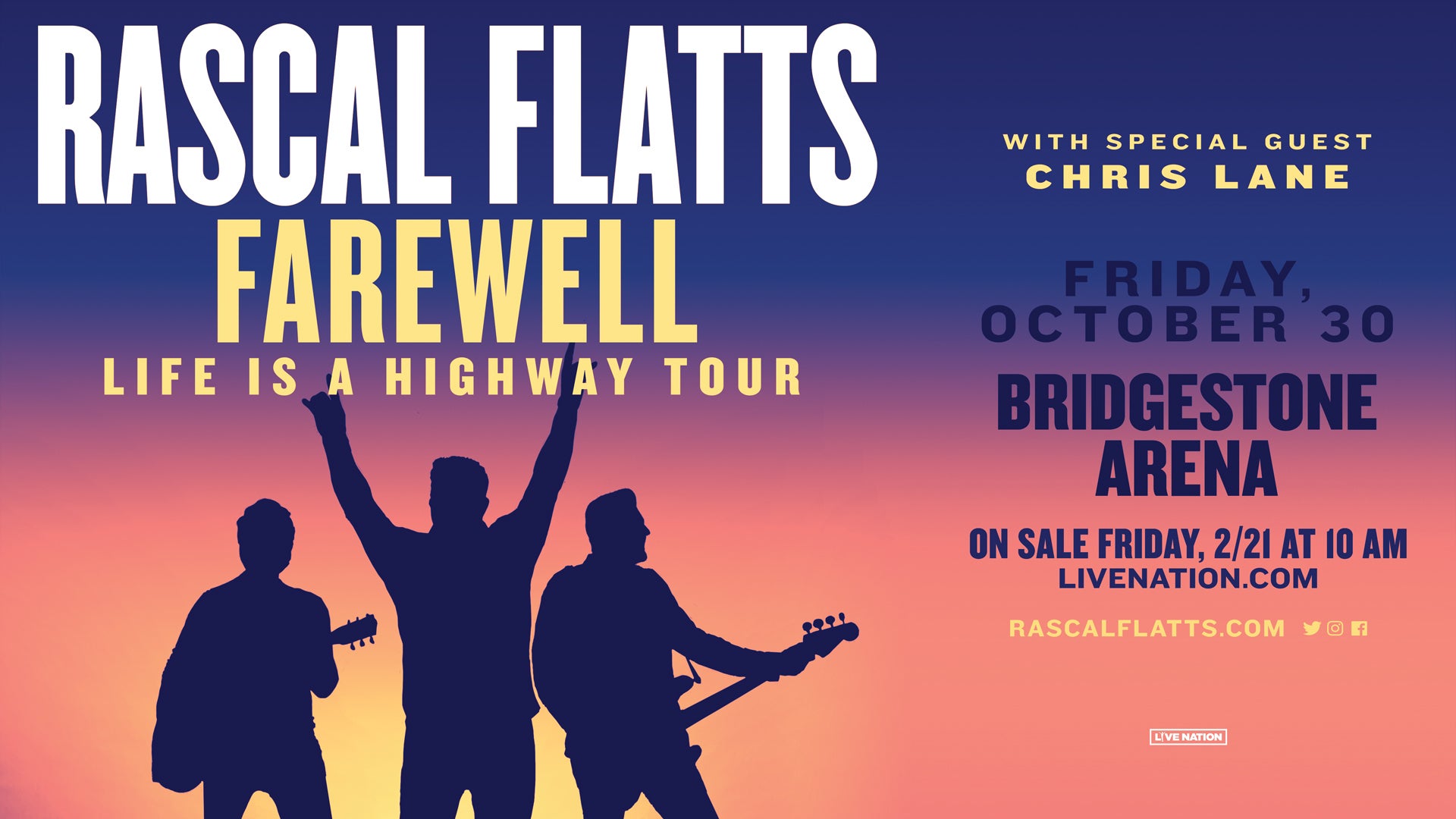 Farewell: Life is a Highway Tour

Farewell: Life is a Highway Tour

Following the announcement of the RASCAL FLATTS FAREWELL: LIFE IS A HIGHWAY TOUR just last month, the superstar trio has announced more dates due to overwhelming demand.  The most awarded group of the past decade revealed two special hometown shows with the news today that they will play Columbus, OH’s Nationwide Arena on 9/25 and they will end the bittersweet nationwide run with a show at Nashville, TN’s Bridgestone Arena on 10/30. Nine additional cities across the country have also been added since the tour was announced, with a full list of dates available below. Tickets are on sale now.

Furthering anticipation for the upcoming celebration tour, Rascal Flatts also shared that they will be inviting special guests Chris Lane, Chase Rice, Avenue Beat, Caylee Hammack, King Calaway, Matt Stell and Rachel Wammack to join them on select dates across the run, with opening artists varying across the tour and more guests to be announced in the coming months. Together, the trio and their fans will reflect on a beloved catalogue of hits including “Bless The Broken Road,” “My Wish,” “What Hurts The Most” – always soulful, engaging and delivered with a positive, universal message – as well as a string of success that places Rascal Flatts among the modern musical elite.

Hailed as one of the most influential groups in modern country history, Rascal Flatts are a chart-topping trio created by vocalist Gary LeVox, multi-instrumentalist Jay DeMarcus and guitarist Joe Don Rooney. Since their founding in 2000 and subsequent breakout with the Top 5 hit, “Prayin’ for Daylight,” the band has gone on to infuse country’s traditional mainstream with smooth-pop textures, arena-rocking energy and faithful positivity, impacting countless fans and fellow artists along the way. They’ve racked up 17 Number One hits, over 23.4 million albums sold, 35 million digital downloads, 2.2 billion streams worldwide and 4.4 billion streams solely on Pandora, while also selling over 11 million concert tickets and earning more than 40 trophies from the ACA, ACM, AMA, CMA, People’s Choice and more, making them the most awarded country group of the past decade. The Grand Ole Opry members will bring an unforgettable chapter in country’s long story to a close in 2020, celebrating their 20th anniversary with Rascal Flatts Farewell: Life Is A Highway Tour – the nationwide farewell tour of their celebrated career. For more information visit rascalflatts.com.

*Citi is the official presale credit card of the Rascal Flatts Farewell: Life Is A Highway Tour. As such, Citi cardmembers will have access to purchase presale tickets for select cities beginning Tuesday February 18th at Noon  local time until Thursday February 20th at 10pm local time through Citi Entertainment®. For complete presale details visit  www.citientertainment.com.