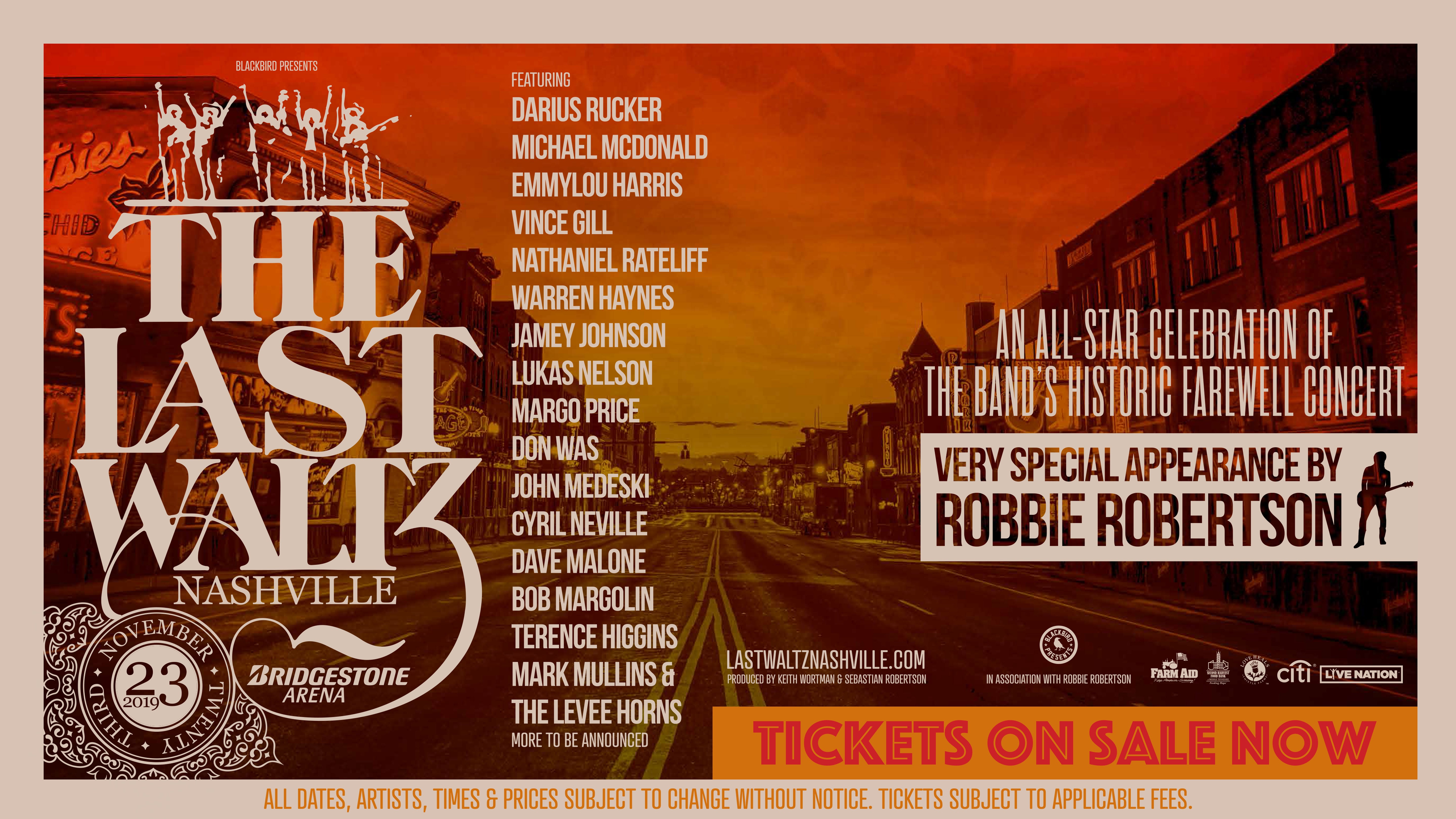 Robbie Robertson, Keith Wortman, Sebastian Robertson, Blackbird Presents and Live Nation are thrilled to announce The Last Waltz Nashville: An All-Star Celebration of the Band’s Historic Farewell Concert to be held on Saturday, November 23 at Bridgestone Arena in Nashville, TN.

This once in a lifetime concert event includes a rare, very special appearance by music icon Robbie Robertson of The Band. © 2019 Blackbird Presents. All rights reserved. 10/7/19

Tickets go on sale Saturday, October 12, 2019 at 10 AM CT at http://ticketmaster.com. Citi cardmembers will have access to purchase pre-sale tickets beginning today, Tuesday, October 8 at 10 AM CT through Citi’s Private Pass program and will be available until Friday, October 11 at 10 PM CT. VIP packages, including great seats and exclusive event merchandise, will be available. The Last Waltz Nashville: An All-Star Celebration of The Band’s Historic Farewell Concert will cap off the November run of 2019’s Last Waltz Tour, currently on sale now at http://thelastwaltz.com.

Blackbird Presents continues its tradition of supporting important charities, particularly during the holiday season. Thus we are excited to announce that a portion of proceeds will go directly to Farm Aid http://farmaid.org, whose mission is to build a vibrant, family farm-centered system of agriculture in America, and Thistle Farms http://thistlefarms.org, a nonprofit social enterprise, based in Nashville, TN, dedicated to helping women survivors recover and heal from trafficking, prostitution, and addiction. In addition to supporting these organizations, Blackbird Presents will organize a donation drive to help support Second Harvest http://secondharvestmidtn.org, whose mission is to feed hungry people and work to solve hunger issues in Middle Tennessee.

Over forty years ago, The Band performed their final concert to a sold-out crowd with a who’s who of Rock 'n’ Roll royalty in attendance. “As far as farewells go, this one was major,” stated Rolling Stone Magazine in a 2016 expose about the famed concert. The evening culminated with “Don’t Do It,” The Band’s cover of Marvin Gaye’s “Baby Don’t You Do It.” After the last note, Robbie Robertson, The Bands’ lead guitarist, songwriter and a founding member, said "Goodnight. Goodbye." walking off stage, forever immortalizing this epic event.

“It is such an honor that the musical celebration of The Last Waltz and The Band carries on today. Blackbird Presents and this extraordinary lineup of talent makes me proud to be a part of this ongoing and wonderful tradition,” says Robbie Robertson.

“These songs are so deeply intrenched in our hearts that they have become a part of who we are as humans,” said Keith Wortman, Founder of Blackbird Presents. “I am honored to present this show, with these artists, in our beloved Nashville and I’m especially proud to support Farm Aid, Thistle Farms and Second Harvest during this holiday season.”

The Last Waltz Tour: An All-Star Celebration of The Band’s Historic Farewell Concert is an extension of Blackbird Present’s November 2019 Last Waltz Tour and the acclaimed 2016 two-night, sold-out concert event The Last Waltz New Orleans and 2017’s The Last Waltz 40th Anniversary Tour which was praised by audiences and critics across the country. “You soon knew that The Band’s legacy would be well feted. Earplugs were required — for the crowd, not the band,” wrote the Huffington Post in its review of the show at the Orpheum in Boston, Massachusetts. "The last 30 minutes of The Last Waltz @SaengerNOLA was the best thing I've heard @jazzfest," said Keith Spera, music critic, The New Orleans Advocate.