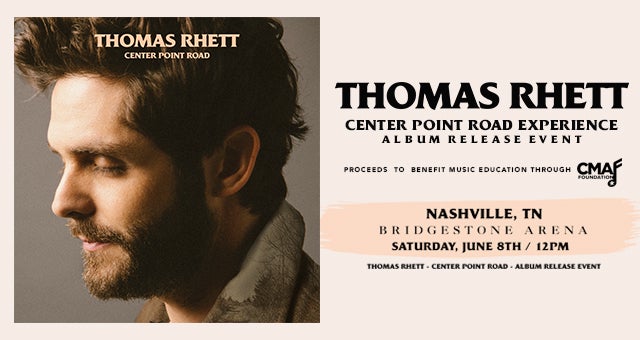 You're invited to experience Thomas Rhett's Center Point Road at Bridgestone Arena during CMA Fest on June 8th at 12PM. Tickets are $25 and include a copy of the upcoming release with proceeds benefiting music education through the CMA Foundation. Tickets are available beginning this Monday, May 13 at 10:00AM CT for fan club members (via Thomas Rhett's Home Team app) and 12:00PM CT for general public on ThomasRhett.com or Ticketmaster.com.

Ramping up excitement for his hotly-anticipated upcoming fourth studio album CENTER POINT ROAD out MAY 31 (The Valory Music Co.), current ACM Male Artist of the Year Thomas Rhett announced today that he will bring CENTER POINT ROAD to Bridgestone Arena in Nashville, TN during CMA Fest on Saturday, June 8. Fans are invited to an up-close-and-personal set from the singer/songwriter revealing stories behind brand new songs, while also delivering the smash hits and fan-favorites that shaped him into the artist he is today in a rare stripped-down, in-the-round setting. Longtime fans will recognize the favorite B-stage layout, inspired by Thomas Rhett's live show where he shares stories behind the songs, connecting him to every seat in the house.

"We've been able to do album release parties all over the country, but to host one in my own backyard during CMA Fest when Country Music fans are here from all over the world is incredible," said Thomas Rhett. "Nashville is home to the memories and stories from this album that made me into the person I am today, and to also be able to help raise money for Music Education while we celebrate this release makes it extra special."

Additionally this week, the "all around star" (Forbes) was nominated for Male Video of The Year for "Life Changes" at this year’s CMT Music Awards, taking place on June 5 in Nashville. Later this week, Thomas Rhett, "at the top of his musical game" (Winnipeg Free Press) transitions from the Canadian leg of his LIFE CHANGES TOUR in Edmonton (5/10) and Vancouver (5/15) to heating things up stateside on the VERY HOT SUMMER TOUR beginning May 17 with special guests Dustin Lynch, Russell Dickerson and Rhett Akins.

The upcoming album’s lead single "Look What God Gave Her" has already earned the highest chart debut of Thomas Rhett’s career, already pushing into the Top 10 at Country Radio this week. CENTER POINT ROAD connects fans to Thomas Rhett’s past, weaving together autobiographical stories with familiar sounds that have propelled his meteoric career. The highly-anticipated new music is the follow-up to the PLATINUM-certified smash LIFE CHANGES, which spawned a 2018 GRAMMY nomination for Best Country Album and has been streamed more than one billion times, delivering a slew of RIAA-certified PLATINUM and GOLD chart-toppers, bringing Thomas Rhett’s No. One tally to 12. Thomas Rhett was named country radio’s most played artist of 2018, following a CMA Triple Play award for penning three No. One songs within a 12-month period, adding to his collection of trophies from the Country Music Association, Academy of Country Music, Billboard Music Awards, CMT Music Awards and more. For more information on new music and upcoming tour dates, visit ThomasRhett.com.