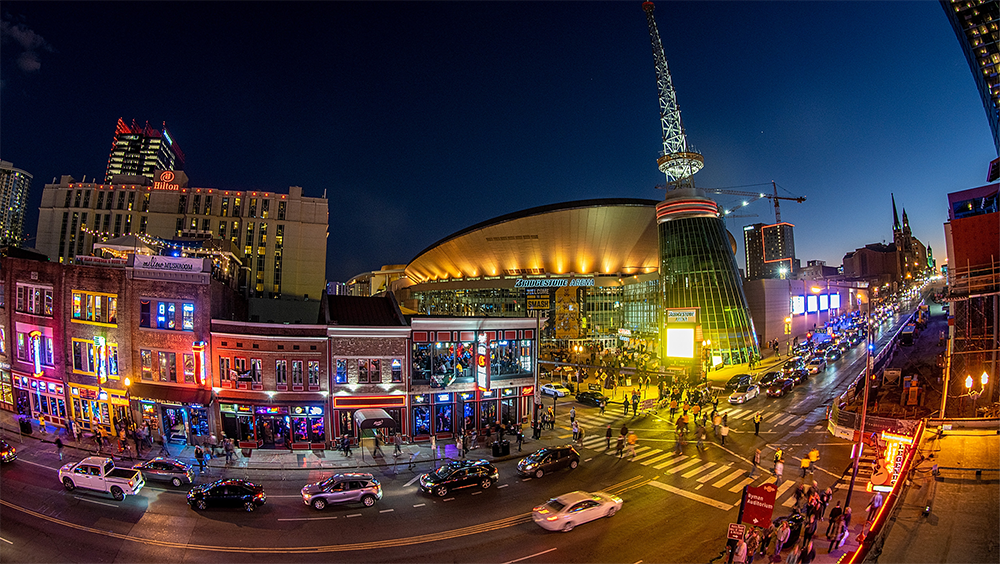 GRAND FORKS, N.D. - The University of North Dakota, in partnership with Ralph Engelstad Arena and the Nashville Predators and Bridgestone Arena, announced today that Bridgestone Arena in Nashville, Tennessee will play host to the 2020 U.S. Hockey Hall of Fame Game on Saturday, October 17, 2020 featuring the University of North Dakota Fighting Hawks and the Penn State Nittany Lions. Game time is set for 7:07 p.m. Central time.

"We are extremely excited to be hosting another great college hockey marquee event," said UND head coach Brad Berry. "This showcase game will give our players and our loyal fans an unforgettable life experience. We're very excited to be headed to Nashville and I can't wait to see our fans experience all that the Country Music Capital of the World has to offer."

"This is exactly the type of event that we desire to have our student-athletes experience," said UND Director of Athletics Bill Chaves. "The student-athlete experience is paramount for us and the Nashville event is an event that we are proud to host and produce. I can't wait to see our team take the ice in Nashville and I can't wait to once again witness a sea of green in Nashville."

"The Hall of Fame Game in Nashville is going to be a great event for North Dakota hockey fans. We have a full weekend of events and activities planned to create a memorable event experience for all involved," said Jody Hodgson, General Manager at Ralph Engelstad Arena. "We'll start things off with a huge and exclusive UND party on Friday night at the world-famous Wildhorse Saloon and then we'll ramp things up on game day with the official pre-game party outside Bridgestone Arena under the autumn colors of Nashville before we drop the puck on what should be a very exciting game."

The 2020 U.S. Hockey Hall of Fame Game has fans covered in regard to hotel rooms in Nashville. Due to the fact that Nashville is one of the busiest and most high-demand hotel markets in the country, Ralph Engelstad Arena has worked with the Nashville Convention & Visitors Corporation to offer event-specific hotel services for fans attending the Nashville event. Nashville Hall of Fame Game fans will have the opportunity to utilize the event's exclusive and centralized online source to manage hotel reservations. Fans are asked and encouraged to book all of their hotel rooms through the event's official reservation portal at Nashville Hotels.

Penn State launched a Division I hockey program in the fall of 2012 and has quickly risen to national prominence, including a Big Ten Tournament Championship in 2017. Penn State will conduct a Hall of Fame Game pre-sale for Nittany Lion hockey fans on Friday, December 13, 2019.

"It will be an honor to play in the Hall of Fame Game and we are very excited to play in Nashville. We want to thank Ralph Engelstad Arena and North Dakota for the invitation," said Guy Gadowsky, head coach of the Penn State Nittany Lions.

Ticket prices start as low as $49. Tickets for the Nashville event are priced at $49, $69, $84, $99, $119, $139 and there is also a Lexus Lounge package priced at $400 a seat for those who seek the exclusive environment in the first two rows behind the glass as well as access to the exclusive and high-end Lexus Lounge featuring unlimited food and drinks during the event. All ticket purchases are subject to additional and applicable ticketing charges. Tickets will be available via Ticketmaster and the Bridgestone Arena box office. Visit the official event webpage at www.theralph.com/nashville for more ticket information.

Bridgestone Arena opened in 1996 and is a two-time winner of "Arena of the Year" and is home to the NHL's Nashville Predators. One of the world's busiest venues, Bridgestone Arena has a seating capacity of 17,159 for hockey. For more information on Bridgestone Arena, visit www.bridgestonearena.com.

"As a former North Dakota player, it's great to see UND get a chance to play a game in my new home of Nashville," said Rocco Grimaldi, UND hockey alum and current Nashville Predator. "I'm excited to see Bridgestone Arena packed out in green with the best traveling fans in college hockey. I know the atmosphere is going to be crazy and hopefully it will be a fun game for the players and fans."

"We are thrilled to have the opportunity host the University of North Dakota and Penn State University in Smashville," said David Kells, SVP of Marketing and Entertainment for the Nashville Predators and Bridgestone Arena. "This is yet another example of Nashville being a prime destination city, and we're proud that Bridgestone Arena can host world-class events like the 2020 U.S. Hockey Hall of Fame Game."

North Dakota has been a part of multiple "destination" games recently, to include: an exhibition in Winnipeg, MB, in 2012 (Clarkson), a pair of exhibitions in 2014 in Vancouver, BC (British Columbia and Simon Fraser), New York City (Boston College) in 2016 and last season's trek to Las Vegas to battle the Minnesota Golden Gophers.