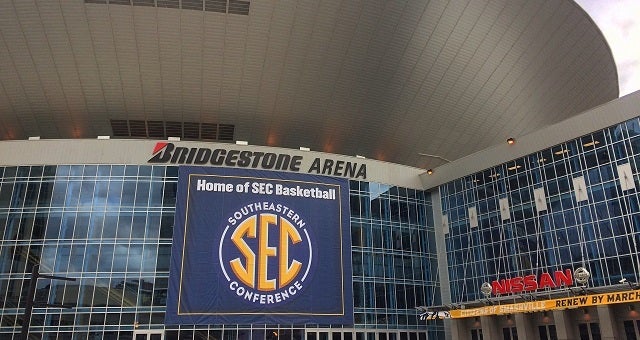 NASHVILLE, Tenn. - The Southeastern Conference has extended its agreement with the Nashville Sports Council that could make Music City the home of the SEC Men's Basketball Tournament through 2035, it was announced on Tuesday.

Under the terms of the new agreement, the tournament will be played in Nashville through 2030, with the exception of 2022, with an option to extend the agreement through 2035.

"Nashville has proven to be an outstanding home for Southeastern Conference basketball and we are pleased to reconfirm this long-term relationship with Music City as the host for these championship events," said SEC Commissioner Greg Sankey. "Nashville provides tremendous support for this tournament, creates lasting memories for our student-athletes and offers an outstanding experience and venue for our fans."

The agreement extends an existing contract that puts the tournament in Nashville through 2025, except for 2022 when the event will be held in Tampa, Florida. The SEC Women's Basketball Tournament will be played in Nashville in 2022.

"The SEC has experienced success with long-term championship site agreements in Atlanta for football, Hoover for baseball and now Nashville for men's basketball," Sankey said. "Similarly, we expect to identify a long-term home for our women's basketball tournament beyond 2022."

"I'm honored to welcome Commissioner Sankey and the SEC to their new second home," said Mayor David Briley. "Their decision to make Nashville the long-term location of their men's basketball tournament is a testament to our city's continued ascendance as a destination for business, great events, and tourists."

The Nashville Sports Council estimates that the extended contract will yield $350 million in economic impact to the Nashville community with an estimated 3.2 million fans filling more than 200,000 hotel rooms over the life of the agreement.

The facility is Nashville's No. 1 venue for large-scale musical productions, as well as one of the nation's most highly acclaimed entertainment and sports venues.

Nashville was also the site of the men's tournament in 1984 and 1991 when it was played at Memorial Gymnasium on the Vanderbilt campus.